A lot of random things popped up all in the same week that I thought were quite memorable, so I thought to share some of these snippets. I know that normal weeks begin with Sunday and end with Saturday, but I have the privilege of not working a set schedule, thanks to my paythebills job, and Tuesdays generally mark the beginning of my “weekend.” So, without further ado… 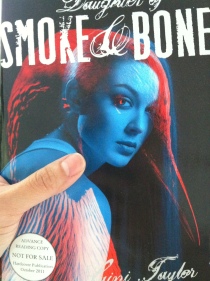 Thanks for lending me the book, Kayla! Also, I think the cover has changed since this ARC, so don't be confused!

I spent last Tuesday (and into Wednesday) immersed in other worlds, namely, Fran Billingsley’s Chime and (the ARC of) Laini Taylor’s Daughter of Smoke and Bone.

Both of these stories were incredibly written and beautifully characterized. I wanted to wrap the words around me, and live in these worlds. Seriously, these books are what I aspire to as a writer. Unfortunately, Daughter of Smoke and Bone is not available until this fall, but Chime is available now!

I unfortunately missed out on a chat that writerly friends of mine were hosting Wednesday night, but here is the archive of that chat. I think we decided to make it a monthly chat, on the second Thursday of each month.

The next few days after that, fueled by insomnia, caffeine, and the raging desire to work on something fun, I fleshed out a chapter of a story (the snippets of which I wrote back in January) and continued to sketch out “next chapter plots.” I was so proud of myself, this song played in my head all day Friday (thanks to my awesome twitter friend, Michele Shaw, aka @veertothewrite, for tweeting me this link, so I can share the madness with you all):

Then, thanks to my lovely friend, Carol, I got these books…

Carol, next in line!

…signed by John Green! (Please visit her blog post, here, where she also shares The Man in Truck incident, and her experiences at WisCon.)

Though I loved getting all three of those books signed, I really appreciated listening to what he had to say about the relationship of the reader and writer, and what he felt was his responsibility as a writer to produce stories that were both helpful and beautiful. Also, we got to hear bits from his new book, the title of which will be released next week. (UPDATE: John Green has announced that the new book’s title is The Fault in Our Stars. He will be signing all pre-ordered copies! Go order one today!)  The book itself comes out in nine months, and from what I heard, I will DEFINITELY be lining up to buy a copy (which will hopefully be signed, too, one day!)(UPDATE#2: Since JG announced he would be signing pre-ordered copies, mine is already signed, but I don’t mind getting it signed again!) 😀

Throughout the week, too, I accrued a pile of titles to be read, even though I promised myself that I would only get one book at a time. What can I say? I’m a book junkie.

So, (thanks to my library), I’m currently reading Julie Halpern’s Don’t Stop Now and Neil Gaiman’s Anansi Boys (via audiobook. What an efficient reader I am! ^_^). Also in my special library bag (what, you don’t have one?), I have:

Actually, the last two were because of the galleys waiting for me in my inbox. Thanks to Galley Grab, I have their sequels (Nocturne and Dust and Decay, respectively), along with Wildefire, by Karsten Knight, The Unwanteds, by Lisa McMann, and Fury, by Elizabeth Miles. (I don’t usually do book reviews on this blog, but I will pass along titles of books I thought were AMAZING! *coughcoughdaughterofsmokeandbonecoughcough*)

So that was my week (which, if you minus the John Green thing, and add a little more insecurity tugging at my “I Can Do This” exterior, was pretty much a typical week).

What Have You Been Up To??

When I was really focused on my fitness goals, I put up pictures of my version of an “ideal body” to give me the visual I needed to continue on my fitness path. I also internalized motivational quotes and used a lot of focusing techniques to keep me driven to reach my goals. Though ripped abs and ever increasing weights are not the central focus in my life, I still have an awesome graphic of a strong woman doing squats as my computer’s desktop image. It comes complete with this statement: “A firm behind like mine comes from the old school leg exercises–deadlift, squat, and lunge.” (For the curious, I stumbled on the pic at Jen Grasso’s Renegade Fitness website here.) I keep this image up to remind me that I have reached my goals before, and to use that success to fuel the success in other areas of my life.

So far, this action plan is working. I am writing and learning more about the process and myself each and every day. However, there are times when I’m just plain tired. Tired of life, or being my own personal cheerleader, whatever. And, though I parallel my writing journey to my fitness journey a LOT, the one thing that doesn’t quite fit is the “pay off” that comes from doing something even when I don’t want to do it.

For example, when I don’t want to train for whatever reason, I could always coax myself to do something which inevitably snowballs into a really good training session. The pay off was, once I started moving I physically felt better (yay endorphins!). Plus, I got great feedback visually because week after week, the result of the constant training was a stronger, more svelte figure. Easy straightforward science.

On the other hand, writing isn’t quite so straightforward. Sure, I can go off of pure word/page counts. And, I do kinda feel like the god of my own universe when stuff starts working and flowing. But, those times that aren’t quite working…when consecutive writing sessions aren’t adding to the story at all despite growing word counts…I begin to feel like…what’s the point?

That’s the feeling that I started with today. Though I was on fire to write yesterday, a long day (which stretched into 5:30AM this morning) turned my writing mindset for today from “on fire” to “blah.”

Thankfully, a few of my darling NerdSquad members were on Twitter, and gave this little pep talk:

And of course, I reminded myself of what Margaret Atwood tweeted at me a few months ago:

On a usual day, I absolutely love the challenge of working through my WIP, either ripping it apart or adding scenes or both. But sometimes, there are days when I’m tempted more than usual to stop progressing. Days that I forget that dreaming up worlds and using words to paint a picture of them is the goal in itself. That I don’t need approval or permission to write; that even if I stop writing, I would invariably return to it (and curse the misspent time of my writing hiatus).

On those days, I’m so grateful to those who walk this path with me to remind me of why I write, and gain strength and encouragement from that.

“In study after study, of composers, basketball players, fiction writers, ice-skaters, concert pianists, chess players, master criminals, this number comes up again and again. Ten thousand hours is equivalent to roughly three hours a day, or 20 hours a week, of practice over 10 years… No one has yet found a case in which true world-class expertise was accomplished in less time. ”

~Daniel Levitin, as qtd by Malcolm Gladwell, Outliers: The Story of Success

Since I started becoming serious about my writing goals, I’ve allowed myself to experiment and play, knowing that I have many more hours of work ahead of me before I will ever feel comfortable bearing the label “writer.”  So far, I’ve learned to prioritize my time and focus on my goal (which in my case was to write a novel).  I’ve learned to turn off my internal editor and push through obstacles, like feelings of inadequacy, to finish a novel no matter what (thanks, mostly to NaNoWriMo).  And, I learned that Stephen King’s rule of “write first with the door closed…” definitely applied to me.  I needed to play with my ideas alone so that I can hope, dream, and fear without self-consciousness (read: embarrassment).

My favorite A-ha! moment, though, actually came from unlearning a habit.  Let me explain.

If you’ve read my “About” section, you’ll know that I majored in English in college.  My favorite classes were those in literary theory, and to this day, I can’t read any text without thinking about it from post-colonial, deconstructionist, Marxist, feminist perspectives (my favorites!).  Criticizing and analyzing texts became instinctive to me, which is great when I had to churn out 20-30+ page papers or critique a writing partner’s work.  Not so much when I have to write primary text, and my brain is full of meta text and distancing language.

It took me a long time to refrain from or cut out all the non story that I was prone to writing (back story, character studies, culture studies, whatever) before I was able to write real text, like narrative and dialogue…basically a story that a reader can expect from a novel.  It was a hard shift in my mindset since my primary instinct was to dissect, and not create.  But, with each new novel attempt and failure, I have slowly progressed from being a writer about books to becoming a writer of books.

I’ve begun to develop and trust my instincts for creating worlds. I’m still a sketcher and I’ll always need a big picture goal for direction. But, I will write a scene with more polish and depth than I’ve done previously, and allow my subconscious to play with the “next steps” as I’m exploring the current scene. I’m letting myself focus on the quality of my words rather than merely the quantity of words (though I will keep my word count goals, since I’m still goal-oriented).  Even if it kills me, I will not leave a scene until it makes sense.  My goal for this next story is to finish with a first draft and not a rough draft.  (Some people think they’re the same thing; for me, my rough and first draft are definitely different.)  I’ll always go for the big picture because it’s heartening to see the page count progress.  But in exploring the depth, rather than breadth, I’ll see more of a world than I previously anticipated.  At least, that’s the hope.

I intended to post this last week (January 25, in fact) but I thought it was too silly to post (and I was kinda distracted by Veronica Mars, season 2).  I mean, really, what value can come from posting my infinitesimal progress toward my writing goals?

But, today, I saw the #followreader chat on Twitter, featuring Margaret Atwood, one of my literary heroes.  I decided to ask her this question…

…and she answered with this…

(By the way, how cool is it that I was able to ask her a question and have it answered immediately??)

Turns out, I just need to keep reminding myself that the only way for me to get better as a writer (and teller of stories) is to continue writing.  And the best way for me to continue writing is to celebrate the progress that I’ve made so far, regardless of how small that progress may be.  I plan to keep churning out crappy words, so that one day, I’ll be able to find better words with which to capture my stories.